What ATMOS processor (or AVR) do you use, what channels setup and what did it cost (approx)?

Experience is ok but still some bugs in the v2.2 firmware need to be sorted out.

As yet to run Dirac live.

Anyone managed to get 9 bed layer channels past the Home Office Minister?

I’m using my Denon X3600H (AVR) as processor feeding LCR + front heights fed to a Parasound A51.
The rear and rear heights are powered by the Denon amp.

Running a Denon X4500 with Emotiva stereo amp for a 5.2.2. Will give up HT when I start my renovation next year until I can have a dedicated room.

Atmos (without the center top front and vog activate)

Auro3D (without the top middle activated)

Also many folks’ dreamed HT processor and I can only dreaming

There are others out there I am very sure. Need to find them or father them here in this forum

I do hope to have a thread for it and really bring in some discussions, tips and tricks.

You can T loan out for home auditions to get discussions , tips and tricks

Absolutely! Lol!! Man I would love to have you guys drop by. Pls make time and will be awesome to host you and desray. It’s been long time since desray last visited.

For next setup, one of the considerations is actually Denon 8500, which can do either 9.x.4 or 7.x.6. Believe with the upgrade to DTS X pro, DTS X can now support both speaker formats together with Atmos.

In a larger room, i wonder which setup would be more advantageous, and why?

For next setup, one of the considerations is actually Denon 8500, which can do either 9.x.4 or 7.x.6. Believe with the upgrade to DTS X pro, DTS X can now support both speaker formats together with Atmos.

You should seriously consider X8500H in your next purchase. This is a different beast altogether compared to other Denon models.

Amps in these D&M AVR’s still let the side down when it comes to ALL channels being driven. And as I have a full 7.16 amps setup already is redundant to go with an AVR when all I need is an AVP. but in the interest for others AVR / AVP is up for discussion. 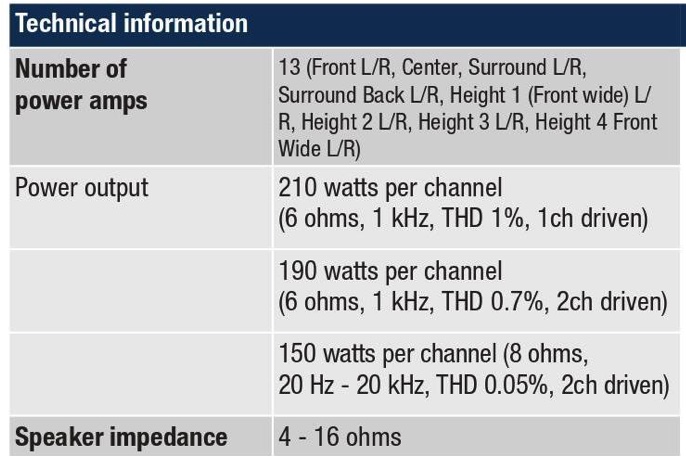 No Balanced in or out and also doesn’t say if the Sub out is really 2 separate or just 2 in parallel.

The Mcintosh MX100 ticks a lot of boxes but only 7.1.4 (wife might approve just because its a Mcintosh tho

) but I would have no phono/line input which is a bit of a deal breaker.

Acurus Muse is tempting but not sure about issues with firmware and still a lack of Room Correction. Pricing might be close to MX100 tho.

Storm Audio is too messy to consider and probably too expensive at the base model even.

Audio Control not sure about either. Anyone have one?

JBL Synthesis might be ok but use here is maybe not even at all that I have seen in the forums…but I have a call into to see if I can trial one. The distributor actually just called me as I am typing this

their ears must have been burning. Their 75 model is basically a Trinnov but almost double the cost (US$32K) for 16 channels and no stock even if I wanted one.

I’m most interested to know the CON’s on what what people are using now with respect to issues like audio / video drop outs or system lockups and lack of updates to fix issues.

Yeah, amps in most AVRs are quite limited when all channels are driven hard. From test reports I read, most give out 60W-75W all channels driven. I have a quick rule of thumb, take the max power consumption listed in the AVR specs, deduct about 10% for the low power circuits, divide the balance with the number of channels driven, it gets pretty close to those test reports.

Since you’ve already the power amps, AVP is the way to go. The Trinnov AVP room correction technology looks really really amazing. The measurement mic itself looks like something you’d find in a science lab.

If you do get the Trinnov, I hope to visit one day…

This is a review and detailed measurements of the audio performance of the JBL SDP-55 AVP home theater processor. It was kindly purchased by a member and drop shipped to me for testing first. It arrived about two months ago. The SDP-55 costs US...

this is under both the Emotiva XMC-1&2 and while I havent looked at others in the ASR site to see how they ranked I will have to hear for myself if its really audible in my setup or now. at least Roon Ready is coming, Dante is there too interestingly as well as Dirac which is a plus.

Besides the 8500, my other consideration is the Monolith HTP1. Seems the most budget friendly 16ch Dirac processor, and the stellar measurements on ASR is very compelling.

Downside is the warranty risk, have to ship back to States… Firmware and functionality wise it also seems very stable. I haven’t actually looked in detail, but you don’t hear the rants and struggles that one notices about some of the other processors including RMC 1 and JBLs.

For me, I guess I’m being silly but I like the simplicity and neatness of running the surround and atmos channels off the internal amps…saves a lot of interconnects.

There are probably only a handful of scenes in a handful of movies that would ever stress an AVR driving 8ch surround and atmos in a typical setup. Something like a 1% scenario?

But I’m sure spl aside, sound quality does improve with external amps. Even at lower nominal volumes.

Sound United has this 70% power guarantee for their AVR nowadays.

I have FULL external 125W/C all channels driven so AVR is of little interest to me at this time.

there is a range of videos in the other $$$ area too

These are all US$ ranges so remains to be seen how the pricing and support is here…I can’t tahan this guys YT style but he does get into a lot of comparisons even down to reliability.

but should get fixed in firmware. I dont want another unit / brand with issues either - better just to bypass as I am doing now with a 4:2 4k Hdmi splitter/switch and using the TV speakers.