Here’s one for the Sam Raimi fans…but in a more PG-friendly version. In the film, “Alex (Winslow Fegley) is a creative boy with a strong passion for writing scary stories. But when he’s labeled weird and rejected for what he likes, he swears he’ll never write again. That’s when an evil witch (Krysten Ritter) captures him in her magical apartment in New York City and demands that he tell her a new tale every night if he wants to stay alive.

“Trapped inside with Lenore, the witch’s spiteful cat watching his every move, Alex meets Yasmin (Lidya Jewett), another young prisoner who has learned how to survive the witch’s wicked whims. With Yasmin’s help, Alex must learn to embrace what makes him unique — his love for scary stories — and rewrite his own destiny to break them free.” 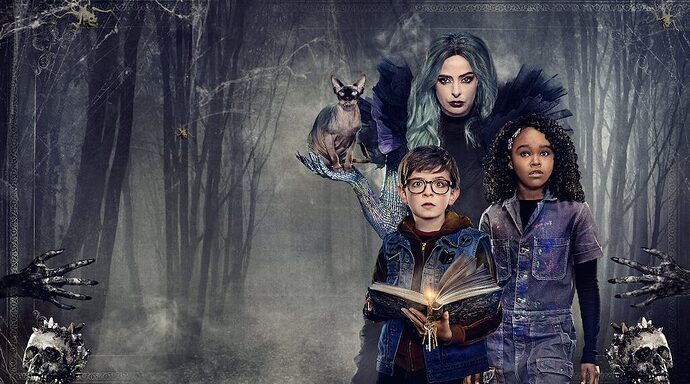 Awesome Dolby Atmos and Bassheads will love it!
What truly strikes me is not the story but the Dolby Atmos effects and the thunderous bass throughout the entire film. Because of the exciting sound mix, it makes this Netflix original a blast to watch. Catch it now with your kids. Yes it’s good. The open few mins and the kitty that went invisible and climb on the walls with the overheads ATMOS definitely won my attention!

Yes indeed. The old witch crouching on top of the elevator in the last act has really good Armos effects. It also has a very good HDR PQ. Directed by Brightburn director…this chap really knows how to bring out the acting in these kids. Very good acting as well imo. There are many 80s horror movie poster references in the movies. See how many you can spot. Watched The Protege starring my fave actor, Michael Keaton and Sam L Jackson…it has some really kick-ass bass and dolby atmos effects even though the audio bitrate is 768kbps (Dolby Digital Plus). I hope to see better sound mix from studios.

On a separate note, Free Guy bluray is a letdown for me in the audio department. Visual wise, it is stunning. I can’t wait to get a 4K copy. The sound mix is in DTS-HD MSTR 7.1 and I thought the bass is anemic (likely will benefit from BEQ) and the surrounds could have been better. Wasted opportunity imo.

On a separate note, Free Guy bluray is a letdown for me in the audio department.

That’s fast !! I just saw the release like yesterday or day before and u have watched it! Really fast

I like Ryan Reynolds, he is funny, he was funny in 6 underground…. His acting is good

I like Ryan Reynolds, he is funny, he was funny in 6 underground…. His acting is good

It’s a good family movie…definitely will keep yours entertained

It’s a good family movie…definitely will keep yours entertained

Sorry, Free Guy was senseless and ridiculously boring which lasted 20 mins for me!
The Protege and Kate were okay though. Good old female assassins’ action movies to wake you up!

Ya we watched two first free guy then jungle cruise, we preferred Jungle cruise with the rock in it but kids feel asleep

One of the scenes Ryan goes “I’ve lost my virginity “, and kids asked what is lose your virginity?? Lol

One of the scenes Ryan goes “I’ve lost my virginity “, and kids asked what is lose your virginity?? Lol

Sometimes I hope they miss it or don’t catch the joke, so I don’t have to explain. On this scene, subtitles were turned on, so they had ample time to read and ask the question… couldn’t avoid the question… lol