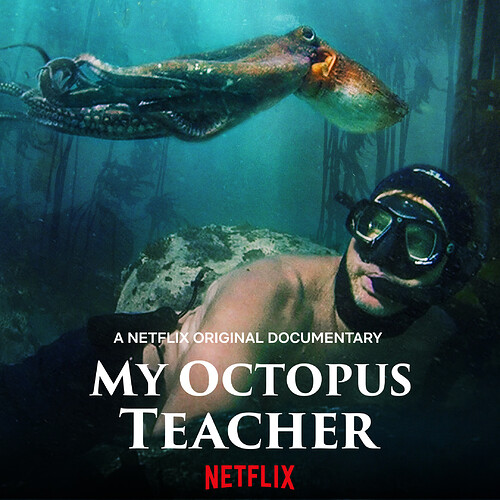 Tried watching this the other day, but 4 minutes in Choo said the octopus scare her. She then said the dreaded words: “I think you watch this on your own.”

So over lunch today, I did just that and I have to say she missed a gem of a film. In fact, I wouldn’t say it’s a film; it’s an out of the world experience. This is a documentary of a man who lost touch with humanity and found himself in a South African kelp forest. He befriends an octopus and becomes a student to the octopus teacher.

Oh my goodness… it wasn’t kidding about the “teacher” part in the title. At the 19th minute a lump appeared in my throat and I gasped in wonder and yes, a tear rolled down. You know how those excellent Planet Earth documentaries put you up close with the wild animals but there is always that small distance between you and those animals. Here, that distance is totally eradicated. It’s zero; it’s zilch; it’s nada. And it’s so humbling when the wild animal, in this case an invertebrate, approaches you because it trusts you. This is one clever octopus. Just watch out for that scene where he outwits a shark.

If the academy gives awards to films that are extremely difficult to film, then this is going to be a winner through and through. The storyteller who is also the student to the sensei, doesn’t use an oxygen tank. Keep that in mind when you watch all the scenes. His lungs must be incredibly powerful.

Part of a reviewer’s job is to know when to say something and when to shut the hell up. I am going to shut up now because there is just too many things I want to say. I will just implore you to sit down with your family and experience this extraordinary documentary together. Put away all your devices, give the teacher your full attention and you might just learn one or two things about being human.

Shhhh… class is in session.

PS - I am so going to persuade Choo to try this again. Nice ! Will watch this. Looks good

He does have a soothing, deep voice. 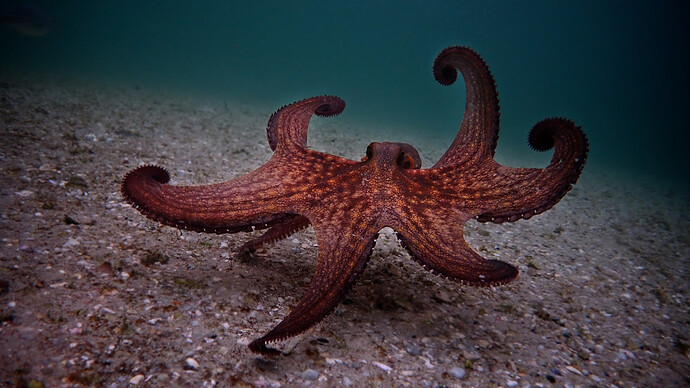 Why the octopus from the Oscar-winning documentary is the "Einstein of...

"My Octopus Teacher" directors speak about the movie and the unique octopus living in a kelp forest off the coast of South Africa.