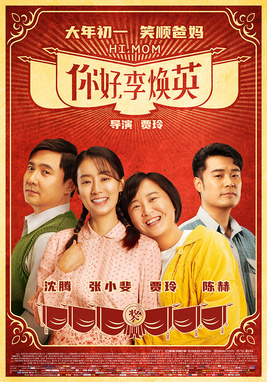 There were two noteworthy movies that opened in the cinemas last week, but my social media was only abuzz with one of them, Godzilla vs. Kong. Yes, I bought tickets and supported the much beleaguered industry in these pandemic times. But I won’t want to squeeze my brain juice to do a write-up for a monster smackdown movie that I had forgotten much of the plot the moment I stepped out into the light. It’s a travesty nobody said anything about Hi, Mom. This is herd instinct in action. If there’s justice in the world, more people should go see Hi, Mom because it’s one of those rare stories that wear its heart on its sleeve and has the ability to jump start and recalibrate your life. Good luck trying to find that in Godzilla vs. Kong.

After her mother Li Huanying is fatally injured in a car accident in 2001, grief-stricken Jia Xiaoling (Jia Ling) finds herself transported back in time to the year 1981, where she meets a younger version of her mother (Zhang Xiaofei) and becomes her close friend. Jia Xiaoling feels that she has not been a good enough daughter in the present, so back in 1981 she does all she can to make Li Huanying happy, including setting her up with a factory manager’s son, Shen Guanglin (Shen Teng), in the hope of giving her mother a better husband, a better daughter, and a better life than she had the first time around

Doesn’t that sound like a page out of the Back to the Future playbook? Adapted from her own 2016 television comedy series, writer-actress-director Jia Ling has crafted a clear-eyed love letter to her deceased mother, correction, to all mothers in the world. It is also a nostalgic trip to China in 1981, a country caught in a period of sweeping economic reform.

The movie is so hilarious that it is not immediately evident that the story of Hi, Mom is born from a sad place. Jia Ling was 19 when her mother passed away in an accident. Her mother’s name is of course 李焕英, the namesake in the Mandarin title. Jia Ling was studying at The Central Academy of Drama in Beijing when she received the bad news and didn’t get to see her mother for one last time before she passed on. Her mother interestingly had a hand in Jia Ling choosing comedy as her major as opposed to drama which was Jia Ling’s choice. In a phone conversation between the instructor and her mother, the instructor mistakenly thought she said comedy because of her thick accent.

Hi Mom has a superb sense of place and time, using the time period of 1981 well. Watch out for a scene where Xiao Ling comes up with a cockamamie scheme to wrestle the chance from her mother’s show-off nemesis so that she can buy the factory’s first television. That evening, everyone witnessed the historic victory when the China volleyball team beat Japan at the Asian Games.

The entertaining movie is a barrel of laughs and keeps its edge and comic zest all the way through, but all through until the beginning of the last act this is a B+ movie. Then, out of nowhere, a twist drops and by golly it becomes an A+ movie. It’s the type of twist that is up there with The Sixth Sense. Suddenly, everything that has transpired has a new layer and I pray at this particular time you have a tissue ready in your hand because it’s going to happen. Tears will stream down like a waterfall. There’s no greater demonstration of maternal love than this where a daughter’s sole aim is to make her mother happy and a mother’s sole purpose is… you know what… I am going to let you find that out for yourself.

For a brief moment when the movie ended, I saw my mother in my consciousness and I remember all the times I had taken her to watch movies like Fargo and The Shawshank Redemption. I remember the time just us two went to Kuala Lumpur and she helped me lug back the entire collection of Haruki Murakami novels and a huge stuffed monkey (please don’t ask why I bought that). I remember the time I went through a heartbreaking breakup and over ice cream she reassured me I would find someone better and she said she didn’t like her anyway. Bless her for saying that.

This week another attention seeker of a movie opens, something called Mortal Kombat. I have no idea it will be good, but I will bet my bottom dollar that Hi, Mom will give you new lenses to see the world with and make you see beyond the wrinkles on your mother’s face into her beautiful soul. Good luck hoping Mortal Kombat can do that. But how could human taste be a barometer of movie quality, let alone mine? I can only use my heartfelt words to convince you to plonk down money on the right movie; my job ends here. This is the second good film I have seen this year. Nice ! Thanks for the intro, I will go watch it